I was one angry child. And, with the support of my family system, my schools and the community we lived in, I learned that there was something very wrong with me for feeling so incredibly angry.

So, I learned to be nice. To be happy. To smile a lot. To ignore, suppress, and to deny how I really felt. I could fit in or I could feel how I felt: angry. Pick one. Not both.

I developed the idea:

Whatever is begun in anger ends in shame.

I wanted to belong, so I chose to be nice and happy and to ignore/suppress/deny my anger.

I don’t usually lose my temper, but if I get angry, it’s true – I’m scary.

Inevitably, my anger would eventually overflow and overpower my capacity to tamp it down. In those moments, I was scary. Explosively 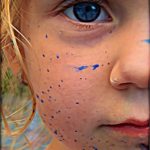 scary. Then, shame would follow, and I would reiterate my desire to not let this happen again – to not feel angry again. I’d work even harder to ignore/suppress/deny what I was feeling.

To say this did not work well for me is a gross understatement.

These days, I’ve started to question the assumptions about anger that I adopted from society, and I’m starting to see anger from a different perspective:

I’ve learned to see anger as a symptom of something deeper, and so the question I ask myself when I notice feeling irritated, frustrated, angry or bottled up is:

What is it that is not working for me in this moment?

Instead of assuming that there is something wrong with me for feeling irritated, frustrated, angry or furious, I assume that I’m feeling that way for a good reason.

Then, I stop and look.

Anger is a taboo in our society

There are a lot of schools of thought out there that tell us that anger is bad, destructive, problematic, limiting, or worse. I’m sure you have your own versions of this… here are a few:

To be angry is to revenge the faults of others on ourselves.

The greatest remedy for anger is delay.

The assumption, according to this wisdom, is that anger is “bad” and that the “right thing to do” is to suppress, deny, or wait it out.

I don’t know how well that works for you. For me, it becomes a bit like a game of whack-a-mole. Suppress one place, pop-up in another.

There is truth in the above wisdom – particularly if we’re talking about acting out anger.

Acting out is rarely helpful.

But, if we’re talking about feeling anger, then it’s another story.

“Anybody can become angry – that is easy, but to be angry with the right person and to the right degree and at the right time and for the right purpose, and in the right way – that is not within everybody’s power and is not easy.”

There is also a lot of wisdom out there that supports honoring the feeling of anger.

Anger is one of the sinews of the soul.

I’m not advocating for acting out anger. Raging, lashing out, yelling, or cutting someone off rarely has an upside, aside from perhaps momentary self-satisfaction. It is usually a relationship or career-limiting move.

I’m advocating for taking a look to see how feeling anger serves you – anger in its healthiest form.

Many of us did not benefit from parents or caregivers that understood that protest and anger have a clear purpose in children. It’s an expression that something is not working for us. And, when heard through that lens, it invites caregivers to listen, to see what the issue is.

What if anger, in its healthiest form, is merely a communication that something is not working for us? That it’s an indicator to pay attention, to notice?

An exercise in understanding anger

Take a moment now. Think of a time recently when you felt anger. (If you don’t feel anger often, that’s an indicator too. I’ll get to that in a moment…)

To me, noticing is one of the most underrated, underutilized tools we have. Consider using it.

But, what if I rarely feel angry?

Generally speaking, if a human being never shows anger, then I think something’s wrong. He’s not right in the brain.

If anger is not an emotion you experience a lot, you might consider that this could be the result of the fact that you were taught to not feel or recognize when things don’t work for you. Just because we don’t’ recognize it, doesn’t mean it’s not there. Ask your partner or your kids what they notice. You may be surprised!

Some of us, like me, learned to be nice in order to feel like we had a place. We learned to not feel when things didn’t work for us in order to fit in. As kids, this often works for us, albeit intermittently. As adults, suppressing anger just as often does not work at all.

The injunction to be nice is used to deflect criticism and stifle the legitimate anger of dissent.

We’re taught to be ashamed of confusion, anger, fear and sadness, and to me they’re of equal value to happiness, excitement and inspiration.

It’s important to acknowledge when a strategy that worked as a child has passed it’s expiration date. Once expired, it’s no longer useful. It then works against us instead of for us. I’ve found that is the case for not acknowledging my feelings of anger or dissent.

Anger is a great force. If you control it, it can be transmuted into a power

which can move the whole world.